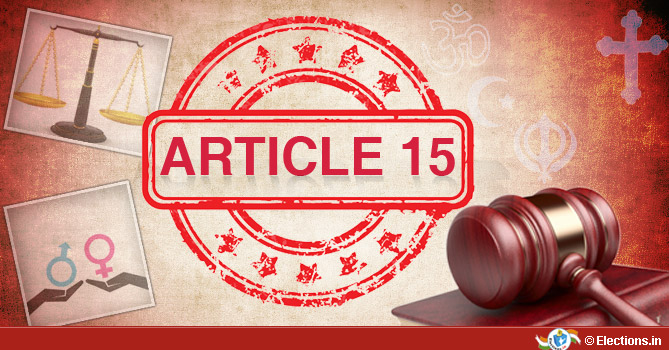 Prohibition of discrimination on grounds of religion, race, caste, sex or place of birth:

Fundamental Rights are guaranteed to all persons by the constitution of India without any discrimination. These rights entitle an individual to live their life with dignity and prohibit discrimination.

Fundamental Rights are meant to promote the idea of democracy. Originally the constitution provided 7 Fundamental Rights but as of now, there are only 6 of them in force. Article 15 falls under the first of these 6 Fundamental Rights- the ’Right to Equality’, and is an extension of Article 14 which talks about the fact that every person should be equal before the law and should be treated equally by the law.

The world "discrimination" refers to make adverse distinctions with regard to or to distinguish unfavourable from others while the term "only" means that discrimination can be done on the basis of other grounds.

The Article also provides the State powers to create special provision for women, children, SEBC (Socially and Educationally Backward Classes), SC (Scheduled Castes) and ST (Scheduled Tribes) so that they can help uplift these sections of society which have been downtrodden in the past, and help realise the core principle behind Article 14 and 15, of equality and prohibition of discrimination.

Article 15(5) goes one step further and empowers the state to make a reservation in admission into educational institutions including private schools or colleges whether or not aided by the government.

Failure to comply with the provisions of the Act can make a company, a person, and a section of society or a group of people liable for punishment.