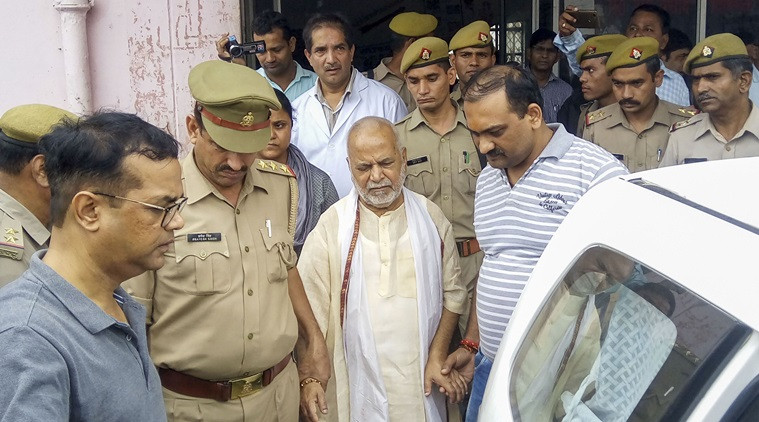 A law student from Shahjahanpur in Uttar Pradesh has accused former Union Minister and high ranking BJP leader Swami Chinmayanand of sexual harassment. Swami Chinmayanand was the Minister of State of Internal Affairs in the 3rd Vajpayee government; he was elected to the 13th Lok Sabha from Jaunpur, Uttar Pradesh in 1999 and was also elected to the 10th Lok Sabha from Badaun district, Uttar Pradesh before that in 1991. He is the Chairman of Swami Shukdevanand Post Graduate College and four other colleges in the district, which are run by his ashrams in Shahjahanpur and Haridwar.

The accusations of sexual harassment surfaced against him on August 27th, when a video of the victim accusing him was put up on Facebook and subsequently went viral on social media. After the video was released the victim reportedly fled from UP as she was scared for her life. In the video, the victim claimed that Chinmayanand “has ruined lives of many girls” and that she had a mountain of evidence that would implicate him. She accused the Swami of luring her into staying in the hostel on the campus, where she was later recorded showering. The video was used by Chinmayanand to blackmail her, and subsequently assault her for a year. After seeing the circumstances surrounding the Unnao case, and the political power that the Swami possessed, the victim alleged that there was a threat to her and her family. The video ended with the woman pleading Prime Minister Modi and CM Yogi Adityanath to intervene.

This allegation against the Swami is not the first time he has been accused of rape, as in November 2011, a disciple of the ashram had accused him of abduction and rape. She had alleged that the sadhus of Chinmayanand’s Haridwar ashram had brainwashed her into becoming a sadhvi, after which she was asked to move to Shahjahanpur to study at SSPG and stay in the ashram there. She was quoted saying, “The Shahjahanpur ashram has only employees and a group of criminals. I was threatened, held captive and totally cut off from my family.” In 2018, the Yogi Adityanath government pressured the prosectution officer to withdraw the rape and abduction charges against Chinmayanand. The Shahjanpur administration wrote to the prosecution officer of the case, to withdraw the case against him without citing any official reasons.

The fact that the previous case was withdrawn the previous year, alongside the circumstances of the Unnao case, made the victim flee the state due to fear for her life, under CM Adityanath’s government, which had demonstrated significant bias and lack of action while dealing with crimes committed by party politicians.

Following search operations, the woman was found a week after the allegations surfaced, in Rajasthan. Subsequently, the police took her back to Shahjahanpur for questioning and interrogation. While the woman was fleeing from Uttar Pradesh, she managed to lodge a complaint at South District Delhi Police Station, saying that, “Delhi Police has registered this complaint at the Lodhi Road police station and has forwarded it to Shahjahanpur police, which is not registering the rape case.”

In order to avoid another situation like Unnao, the Supreme Court issued a directive for the formation of a Special Investigations Team (SIT) to investigate the case on September 3rd. The SIT, headed by Inspector General Naveen Arora has taken charge of the case and is looking into the details of the probe conducted by the Shahjahanpur police. The SIT interrogated the victim for 11 hours on 15th September during which time she gave the team a Pendrive containing 43 videos supporting her allegations, which were taken by her through a hidden camera in her glasses over the past year. The SIT also took the woman to Chinmayanand’s bedroom, to collect more evidence.

The SIT went on to question Chinmayanand for around 7 hours on September 14th, after which he was brought back to his residence on the campus grounds. In response to the charges laid against him, his lead counsel Om Singh claimed the accusations were part of a conspiracy to blackmail the BJP leader. Speaking to news agency IANS, the lawyer claimed that Chinmayanand was being blackmailed and had been asked to pay Rs 5 crores. The lawyer said he believed the girl's video and the blackmail attempt were probably linked.

On September 20th a month after investigating the case, the SIT arrested Chinmayanand and sent him to jail on charges of “sexual intercourse not amounting to the offense of rape”. The law student who accused Chinmayanand, was also arrested the very next day by the SIT and charged with extortion. SIT chief Naveen Arora said that 3 of her friends were involved in helping her extort the Swami, and while there was proof against her friends, there was none against her. She was released on bail on September 23rd, but after further questioning by the SIT and discovery of new forensic evidence linking her to the extortion case, she was arrested again on September 25th and sent to 14-day judicial custody.

BJP has released an official statement claiming that Chinmayanand is no longer a member of the party and the Akhara Parishad is taking up his expulsion from their spiritual body as well. Chinmayanand has been kept in Lucknow hospital after he was diagnosed with diabetes and severe urinary problems.

While the BJP has been distancing themselves from Swami Chinmayanand, senior leaders of the Congress party organized a march from Shahjahanpur to Lucknow called the “Nyaya Yatra”, protesting against the injustice against the law student and demanding her release. Former Union Minister Jitin Prasada and district Congress leader Kaushal Mishra were placed under house arrest in order to prevent them from joining the protests, while Ajay Kumar Lallu and Dheeraj Gurjar were arrested and kept at Police Lines. Even the Samajwadi Party criticized the BJP for helping Swami Chinmayanand in every way possible.