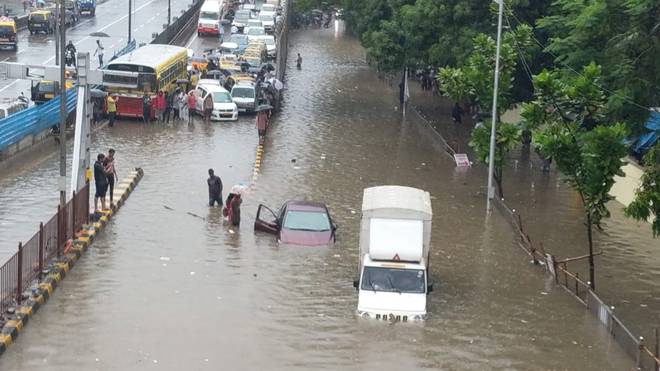 The one season that Mumbaikars eagerly await - the mumbai monsoon - is beginning. After a heatwave that left everyone sweaty and sticky, the rains are a sight of relief for the city. The Mumbai monsoons are an experience, and if you’re lucky to be in the right place at the right time, it will most certainly take your breath away. But all this sounds too good to be true, especially if you’re a veteran Mumbaikar who’s familiar with the workings of the Brihanmumbai Municipal Corporation (BMC) during the mumbai monsoons.

Every year, just as we Mumbaikars prepare to embrace the mumbai monsoon showers, the BMC undertakes the mammoth task of preparing the city for them, and this year, with Mumbai undergoing a major overhaul due to the Mumbai Metro Construction and Coastal Road project, many Mumbaikars are rightfully questioning their preparations. After a delayed arrival of the mumbai monsoon this year, the slowest onset in 45 years, the financial capital has received 550mm of rainfall in two days, the highest over a two-day period in a decade.

So has the BMC prepared our resilient city for the mumbai monsoon? Or will Mumbaikars going to suffer a season full of heavy traffic disruptions, potholes, sewage problems, floods and more? With the rains already making their way to the city, we have prepared a detailed account of the various issues that may flood our city over the next couple of months, and highlighted the solutions that the BMC has put in place to tackle them.

Flooding is a chronic and recurrent problem in Mumbai, particularly when spells of intense rainfall coincide with high tide. The process of urbanisation, however, has played a major role in aggravating the problem as it has caused significant alterations to the hydrology, morphology, and ecology of the area.

The city faces significant challenges due to an extremely limited supply of land, proliferation of slums due to non-availability of affordable housing, insufficient social and physical infrastructure and an increasingly degraded physical environment. Three different types of flooding are evident in Mumbai: localised flooding due to inadequate drainage, flooding due to overflows from the Mithi river and flooding due to a combination of high tides and high river flows. Frequent floods in the past decade have shed light on the urgent need for the BMC to enhance the internal competency to prepare, manage and eventually reduce the city's vulnerability to flood related disasters.

The BMC issues an annual report highlighting Flood Preparation Guidelines which states that they have installed 60 automatic rain gauges at 60 locations, of which currently 54 transmit rainfall data to the Disaster Control Room at the Municipal Headquarters Office. As soon as rainfall exceeds 10mm in 15 minutes a warning is issued to the concerned wards. If rainfall exceeds 20mm in a 15-minute period they issue an alert signal to the localities in the catchments concerned. If this continues for over an hour, a "risk warning" is issued and rescue operations are required to commence immediately.

Also these 2019 Flood Preparation Guidelines, which can be found on the disaster management website are unfortunately identical to the 2018 version, despite a deceiving index that claims to include 2 more sections and 245 more pages that quite simply do not exist. When we called the disaster management hotline for a comment on the matter, there was no answer.

The heavy rainfall that has occurred over the past two days has already fractured the city. Sion, Thane, Malad, Sakinaka, and Andheri have seen considerable flooding. 5 people have already died in Thane due to rain related accidents and 18 people died in Malad as a wall fell down on them. Maharashtra Chief Minister Devendra Fadnavis has been said to be taking stock of the situation in Mumbai, from the disaster management control room in Mumbai.

The Indian Navy on request by the BMC, also deployed various teams to provide assistance to rain hit and stranded people in the Kurla area, with about 1000 people moved to safety with the help of the NDRF, fire brigades, the naval teams as well as local volunteers. 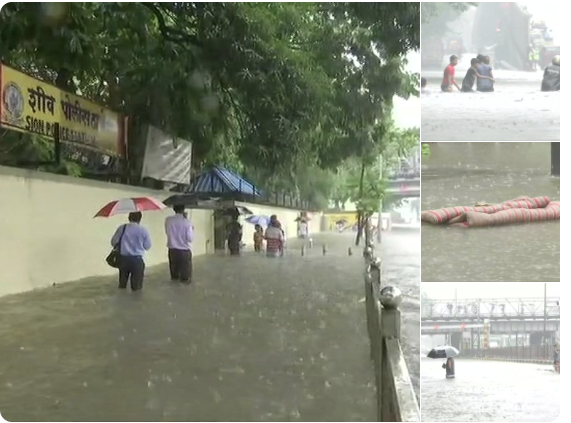 BMC chief Praveen Pardeshi issued a statement saying, “There is one thing -- climate change is happening. We never have rainfall in two days equal to a months lot, which means more intense rainfall, this is geographic phenomena.”

In response to the flooding,during the mumbai monsoons, the BMC has also set up the ESF (Emergency Support Functions) that form the essentials of emergency management and helps with the coordination mechanisms among the various agencies. The various ESF's identified by the BMC range from Communication and Transport to Fire Fighting and Search & Rescue.

In addition to the major construction work in the city as part of the development of the coastal road project, the BMC had also marked 200-odd spots where pre mumbai monsoon work had to be completed. These spots are still witnessing either trenches, dug-up or non-concretised roads and footpaths and leftover loose soil, gravel and stones.

In response to the concerns expressed by the citizens over possible flooding owing to coastal road work in South Mumbai, the BMC has set up control rooms at the construction sites. Upon calling the Disaster Management Control Room of the BMC (phone number: 108), an official said, “In order to ensure anti-flooding measures at all these sites, control rooms have been set up to attend to any complaints. The citizens can access these numbers in case of emergencies related to stormwater drains or any other work related to coastal road during the monsoon.”

According to BMC officials, around 6 drains have been extended up to the new coastal road project boundary along with the contractors installation of dewatering pumps to drain out excess rainwater in order to avoid flooding.

The BMC has also already warned regarding traffic gridlocks throughout the city with the closure of three bridges namely Delisle Bridge at Lower Parel, Lakshmi Baug Nullah bridge on Ghatkopar-Andheri Link road, Juhu Tara Road bridge, and the Sion-Dharavi pedestrian subway, due to their dilapidated conditions, in order to avoid a disaster like the collapse of the CST footbridge earlier this year.

Trees and Manholes are notorious for taking lives and severely injuring people during the  monsoons. Praveen Pardeshi claimed that the BMC had removed a large number of risky trees before the mumbai monsoon, and the BMC’s civic gardens department had put up 10,00 posters with the note: "Warning. During heavy rain and winds tree may fall. Be aware." in areas prone to trees falling, but at least 3 tree fall deaths had already been reported by June 15th. One might wonder how a person under a falling tree is expected to have enough time to read this poster and then flee. That too if, the white paper the poster is printed on survives the water and wind it’s been subjected to in the rain. But we guess it’s the thought that counts right, BMC? 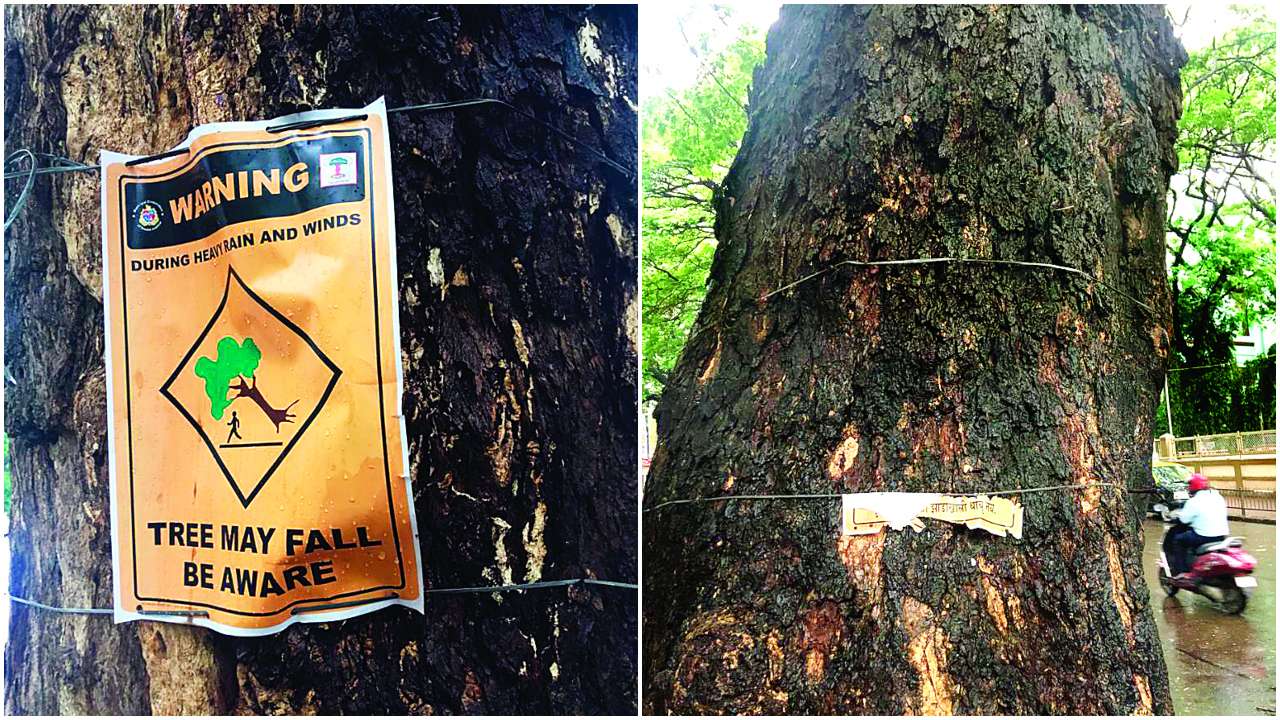 In regard to manholes, the BMC put up barriers around open drains and have added stormwater drains and a system to clear accumulated water on roads that have been repaired recently. However, roads that have not been repaired recently due to telephone lines, optical fibres, and water pipelines, still have broken manholes since the roads have not come up for renewal, a process that could take months unless residents of areas with manholes demand updates from their local corporators.

Tracks get submerged under water every mumbai monsoon, paralysing the local train movement and fracturing the ability of locals to commute. Every year during the mumbai monsoons the trains get delayed due to water logging, and this year has been no different, with the ongoing repairs and constructions in various areas making matters worse.

In an interview with Hindustan Times, Praveen Pardeshi had assured that Metro and local trains would not come to a standstill this monsoon, but that was not the case. The central railway line has been flooded due to the heavy rainfall Mumbai has experienced over the last 48 hours and work is being done to pump the water out and resume transport as soon as possible.

As many as 53 flights have been cancelled and another 55 have been diverted to nearby airports due to inclement weather and skidding of a Spicejet aircraft in Mumbai airport on July 1st. Efforts are underway to remove the Boeing 737 from the runway and restore operations as soon as possible.

While the BMC tries to ensure the smooth functioning of the city during the mumbai monsoons, it is important that Mumbaikars remain alert and vigilant.

The Indian Institute of Tropical Meteorology (IITM) has also released a similar "Mumbai Weather Live" app which provides real-time rain data to all citizens at the touch of a button. The app will update rain readings every 15 minutes after collating measurements from India Meteorological Department (IMD), Mumbai; System of Air Quality and Weather Forecasting and Research (SAFAR), and the BMC.

The BMC has also rolled out hotline numbers for control centres related to the Coastal Road project and Mumbai Metro construction, so that Mumbaikars can report any water logging or flooding near those areas. All in all, we recommend you keep your phone charged, because it seems to be the only way to wade through these turbulent times.

Mr Pardeshi had said that the BMC planned to use the disaster management room proactively, instead of reactively- a promising idea, which seems to have fared poorly when put to test. But who do we blame, the BMC’s annual unpreparedness or like Mr Pardeshi says “climate change”?