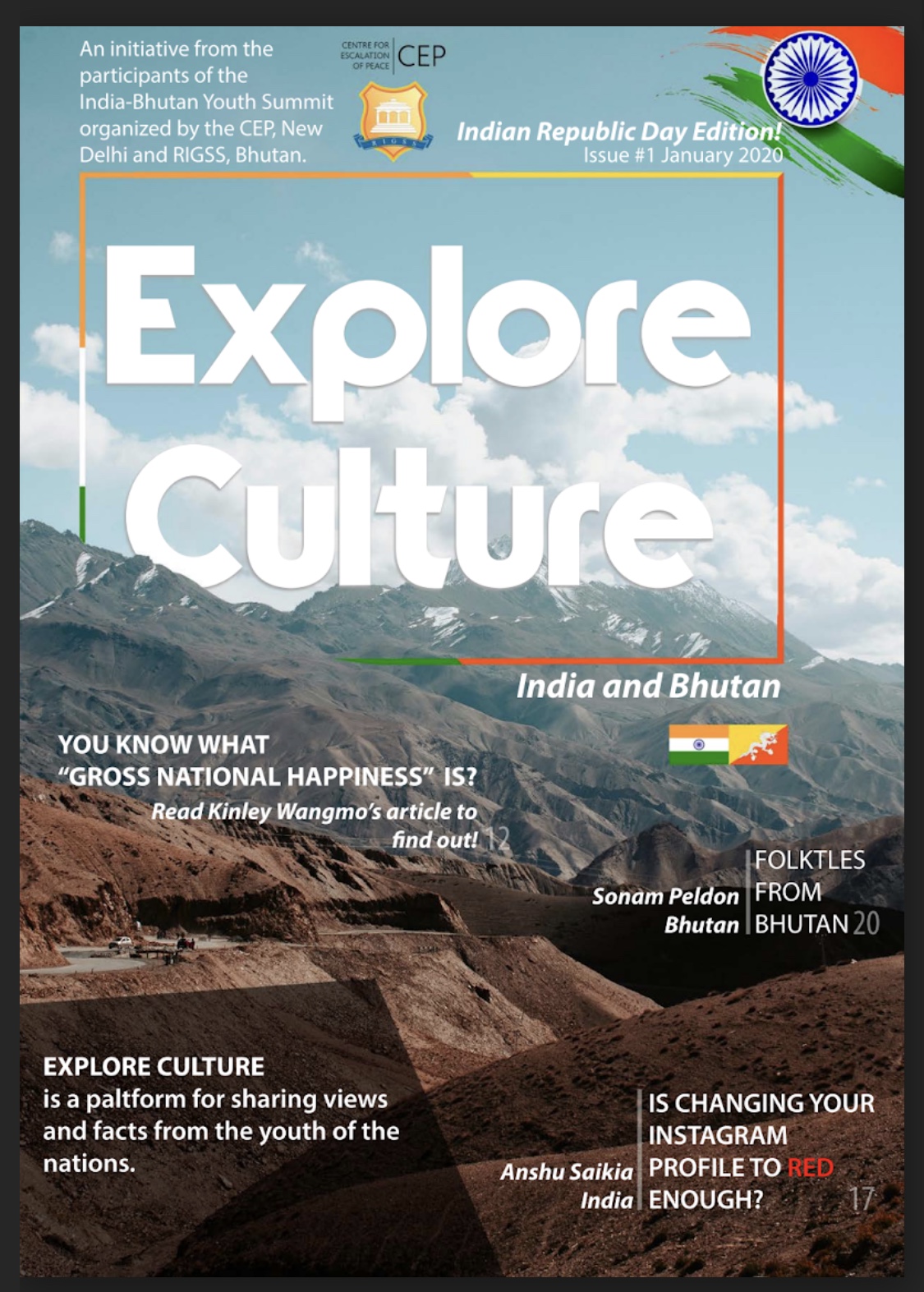 The next in our 'The Loka' series is Vidhi Bubna, the Youth Ambassador for India - Bhutan relations. She’s also a journalist who covers India - China relations and geopolitical issues worldwide. She’s a contributor to several international publications.

How would you describe your job?

As the Youth Ambassador of India and Bhutan, I work towards fostering youth relations between the two countries. I have created a magazine called "Explore Culture" which aims to get the youth more involved in diplomatic relations of the country with other nations. The magazine's current specific focus is on India and Bhutan relations. I believe that increasing youth participation in democracy and diplomacy increases their awareness about the nation and turns them into more responsible citizens and voters.

When and how did you start your career?

I applied for the India Bhutan Ambassador program which is launched by Center for Escalation of Peace and Royal Institute for Governance and Strategic Studies. After I was selected for the program in Delhi, on the first day itself, we had an interaction with the Ambassador of Bhutan to India, V Namgyel. I was intrigued when I spoke to him because he was very humble. As someone who had never had any exposure to a career in foreign services before, I decided that it was my calling. Since then I have been involved in a variety of projects which are related to foreign services and relations in India.

Why did you decide to work in this area?

Coming from an Economics background, I often felt lost when I had to go vote because I was not politically aware. I barely knew anything about issues in India and the world. I realized that political knowledge is largely lacking in the youth in India, and I decided to create a platform that would initiate conversations on politics, business, economy, and culture in the nation at large. Moreover, I wanted to contribute to building India's international relations with its neighbors. I have always been a civil services aspirant and I hope to contribute to the sector sometime in the future.

Can you identify a fulfilling moment in your career?

The most fulfilling moment I had as the Founder of "Explore Culture" magazine was when I emailed the Ambassadors of Bhutan and India, Mrs. Ruchira Kamboj, and Mr. V Namgyel, to write a foreword for the magazine and they were delighted to do the same. I am really grateful to the Ambassadors for their encouragement to youth initiatives like the magazine. I felt delighted when the magazine's first edition was launched on Republic Day of India, 26th January 2020 and it received an amazing response from foreign ministry officials and the youth alike.

Can you identify the hardest moment in your career?

Being just 21, I have faced various challenges that have arisen during my career until now. I am certain there will be bigger challenges in the future. I would like to quote an IAS officer I appreciate immensely here, "It is not us who face the challenges, it is the challenges that face us". This makes me, even more, intrigued to keep going on in life and see what life has in store for me. I strongly believe that if one has the correct mindset, the word “hard” is just something one has to overcome mentally. Creative policy-making is shaping the India of today, during these unprecedented times, and I'm certain India will come out stronger.

What are some of the goals that you would say you are working towards right now?

I want to not only improve India's relations with Bhutan but also with other neighboring countries like China. I exclusively cover India - China relations and recent developments on the border for defense-related publications in India. I am intrigued to learn more about geopolitics which plays an important role between India and its neighbors. I am working towards expanding "Explore Culture" magazine's initiative to involve youth from other neighboring countries of India and increasing collaboration between them. It is my long-term goal to contribute to India's foreign services with respect to India's neighboring countries specifically. I am also working closely with IAS officers in India to compile their biographies and publish a book.

What are some of your dreams for our country? What do you think you do to work towards them?

I want India to rise as a diplomatic leader in Asia and lead conversations on equality, trade, and collaboration between other Asian countries. International relations are an important facet for India which has gained respect over the years because of inclusive policies like secularism and diversity. I want to lead conversations of India on topics of interest with its neighboring countries in the future. My experience as India - Bhutan Youth Ambassador has been enriching and I have learned more about the youth's opinion during my work as Editor in Chief of "Explore Culture". I want to see the youth growing into more responsible citizens who are capable of understanding politics and taking up leadership roles in the future. I am keen to contribute to giving the youth a platform to voice their opinions and "Explore Culture" is a magazine that aims to do that. I also am aware of political issues in the country and I stay up to date with current affairs from various news channels. I strongly believe that reading and understanding news is the first step towards becoming a more politically aware citizen. Being a contributor for various publications worldwide, I like to write about global issues and shape their solutions.

What would you say is your most significant contribution to the smooth running of our democracy?

I have contributed towards the smooth running of democracy in India by creating a more "woke" youth which is aware of its own culture, politics, business, economics, and issues, as well as aware of a strategic neighbor and their culture. This creates more empathy in the youth towards citizens of other countries and changes their approach from seeing people from other nations as "us vs. them" to "all of us". Hence, there is more unity among the youth, and they can work on future collaborations with more ease.

A democracy is said to be smooth running when the voters are more aware of who they cast their vote for. As someone who is increasing awareness among the youth to ensure that they make a responsible choice while voting, I feel like I am contributing to the democracy of India.

I want the youth to believe that nothing in this world is impossible. You have the power to do everything in life which you want if you are willing to struggle for it. I strongly believe that the youth has the power to shape the country and decision making more than it realizes.