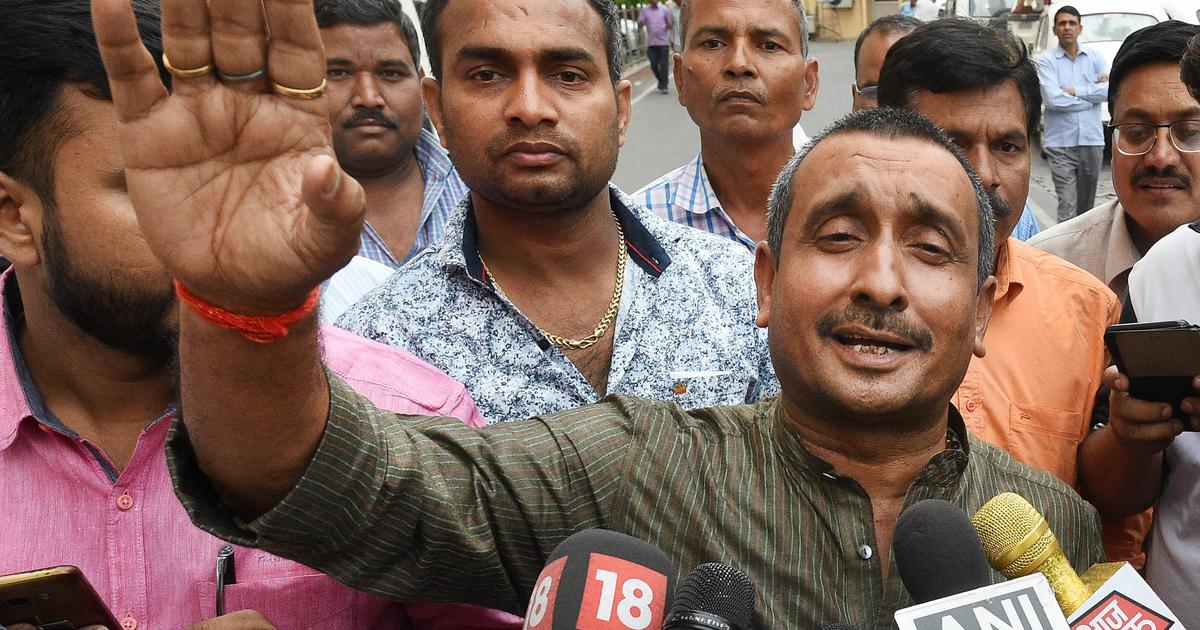 The infamous Unnao rape case refers to the brutal gangrape of a 17-year-old girl by Kuldeep Singh Senger, an ex BJP leader, and four-time MLA from Bangermau in the Unnao district of Uttar Pradesh. His brother Atul Singh, relative Shashi Singh, 3 policemen and 4 other men including an Awdesh Tiwari and Brajesh Yadav, were also charged for the heinous crime that was committed on 4th June, 2017.

The horrific incident took place when Shashi Singh, a distant relative of the family lured the girl away to Kanpur on the pretext of a job. Shashi’s son, Shubham eloped with her and that is when the trouble began as Kuldeep asked them to get married but Shubham’s father disagreed. She was then taken to Kuldeep’s house, where the girl was allegedly gang-raped by Shashi Singh, Atul Singh and associates.

While an FIR was filed after the attack, no action was taken against Kuldeep Singh, who was allowed to intimidate the victim's family and even filed false complaints against the victim's uncle. The victim penned an open letter to CM Yogi Adityanaths highlighting her duress, but it failed to provoke any action against Kuldeep.

On 3rd April, 2018, Atul Singh and his accomplices beat up the victim’s father mercilessly. Instead of arresting Atul Singh and the accomplices, the police arrested the victim's father on charges of possessing an unlicensed firearm. The victim and her family feared that he was being tortured in custody and on April 8th, desperate for action from the authorities, the victim tried to immolate herself outside CM Yogi Adityanath's house in Lucknow. The very next day, the father died in custody and his postmortem report listed internal bleeding, bruises and severe injuries that he had suffered while being held.

These incidents gave the case national media coverage, and protests and candlelight marches took place in almost every major city. Yogi Adityanath’s government was finally forced to act, and the CM set up a special investigation team to look into the rape and the father's death. The case was later handed over to the CBI as it became a matter of national outrage, and on 13th April, 2018, nearly one whole year after the gangrape, Kuldeep, Atul, and their accomplices were arrested and charged.

Even after his arrest, Kuldeep Singh constantly made threats to the victim’s family members. The victim's uncle was suddenly convicted for an attempt to murder case that was charged against him 19 years ago and was sentenced to 10 years in jail. Mohammad Younus, one of the key witnesses in the case of assault on her father, also died under strange circumstances on August 21st, with even autopsy reports being unable to find the exact cause of death.

On 28th July, 2019, the victim, two of her aunts and her lawyer were traveling to meet her uncle in jail, when a truck with a greased out number plate rammed into their car. Both her aunts were killed instantly, while she and her lawyer survived despite being critical. 3 security personnel who were assigned to the victim were suspiciously not present with her during the time of the accident, and were subsequently suspended. The girl's uncle filed a case against Kuldeep for the accident, as Kuldeep had earlier called and threatened to kill them if they did not retract the case. The accident rocked the Parliament, with both the opposition and the National Commission for Women demanding action against the accused.

The Supreme Court transferred 4 cases relating to the matter from Lucknow High Court to Delhi High Court, appointed Special Judge Dharmesh Sharma to preside over the hearings, and ordered the state government to pay the victim Rs. 25 lakhs as interim compensation. The victim and the lawyer were both airlifted from Lucknow to AIIMS in Delhi for their treatment and safety, and while the lawyer is still critical, the victim has been shifted to a normal ward and is able to speak again.

The trial which is currently going on has been taken up on a day to day basis. The CBI submitted before the Delhi High Court that the girl had indeed been assaulted by Kuldeep Singh and his associates when she was a minor. The court granted a special request for holding “in camera” proceedings at AIIMS in New Delhi on 11th September so that the court can hear the victim's statement.

On Friday, the victim completed recording her testimony at the temporary court set up at the AIIMS hospital. She was deposed before district judge Dharmesh Sharma, and Kuldeep Singh Sengar and co accused Shashi Singh were also brought to the temporary court for the statement. The victim was brought to the hearing in a wheelchair and recorded a painful statement, following which she was cross examined by the accused and co accused's lawyers. Another lawyer who was present at the proceedings said, “the victim was in a lot of pain during the proceedings but she managed to complete her testimony”. This week the temporary court is scheduled to hear arguments pertaining to the custodial death of her father and the Arms Act case he was charged with.

The Unnao rape case is unique as it highlights the blatant and astonishing disregard for law and authority; this sort of abuse of power has undermined the position of women in our society. While the circumstances of this particular case are extremely peculiar, cases of brutality against women in India is not uncommon. We hope that talking about these issues publicly will help improve the situation and bring justice to the victims of these heinous atrocities.