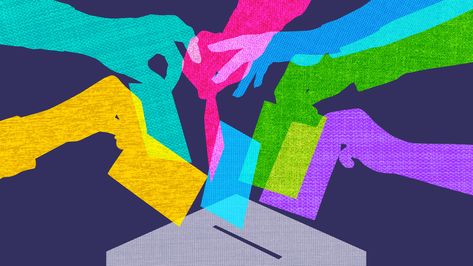 Democracy is a system of government in which citizens exercise power directly or elect a representative from among themselves to form a governing body, such as a parliament. It is also referred to as “rule by the people” or “rule of the majority”.

The term “democracy” first appeared in ancient Greek political and philosophical thought in the city-state of Athens during classical antiquity. The word originates from the Greek word demos meaning “common people” and kratos meaning “strength”. It was established in 508-507 BC in Athens led by Cleisthenes, who is known as the “father of Athenian democracy”.

The United Nations reaffirmed at the 2005 World Summit that “democracy is a universal value based on the freely expressed will of people to determine their political, economic, social and cultural systems and their full participation in all aspects of their lives,” There is no fixed definition of the term democracy, there is scope for each country to operate democracy differently. Nevertheless, there are some essential facets of what is universally considered democratic in government:

India is the world’s largest democracy, with a population of over 1.37 billion in 2019, all endowed with a right to vote. On 15 August 1947 India became an independent country in which its citizens were given the right to vote and elect their leaders, irrespective of their caste, religion, gender or disability. The Constitution of India, which came into force on 26th January,1950 is the longest constitution of any independent nation and states that the country is sovereign, socialist, secular, democratic and republic. The constitution also endows citizens with 6 democratic rights: